Bacon and Chocolate has been a trend for quite some time now. Looking for a new twist on the idea? Look no further than Sir Francis Bacon Peanut Brittle.

Brittle is a simple candy that has roots in the histories of countries all over the world. It can be made by boiling sugar and water to the "hard crack stage" (about 300 degrees) and the spreading into sheets to cool. Various cultures have substituted sugar for molasses, corn syrup, or honey. Recipes vary with added butter, milk, and flour to influence how crisp or chewy the brittle is. Nuts are very commonly added to brittles, pistachios in the Middle East , hazelnuts and almonds in Europe, and Peanuts in the United States. The popularity of peanuts in the United States stems from their usage in the Civil War to feed soldiers, and then expanded by George Washington Carver who developed hundred of ways to use this versatile legume. 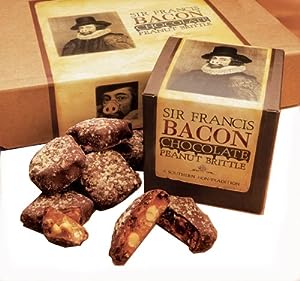 As a result peanut brittle has become a traditional sweet among the American Southeast. With a dab of added peanut butter for a mild chew and satisfying crunch. There has been little experimenting with peanut brittle, a little chocolate here, some spices there. Bacon Peanut Brittle really breaks the mold with a delicious combination. The bacon plays off of the natural salt flavors of the peanuts, giving the bar a very warm balanced flavor. The tangy flavor of the bacon is an underlying taste, but the smoky notes come through quite nicely. The combination of sweet and smoky is the strength of this bar, and something I have very rarely encountered in the world of chocolate. Sir Francis Bacon Brittle comes plain, or chocolate covered. Either combination makes for a delicious and unusual gift.