Milk in Chocolate: Milk Creams and the Myth of the Milky Way

Custards, crèmes, and puddings are versatile sweets eaten hot or cold in countries all across the world; and each in a favorite comfort food of mine. From a young age, I’ve considered myself a little dairy crazy, and I’ve always had to choose a sit down dairy dessert with a spoon or a chocolate bar for the road. In Europe, the variety of milk cream chocolates gives you the best of both worlds.

In Germany, the most well known name in Chocolate is Kinder. The standard Kinder Chocolade is a milk chocolate stick filled with a thick milk cream. The balance between the two creates a smooth taste treat. True to its name, German company Milka delivers a delectable Alpinemilch Cream bar, and in the U.K. Cadbury cream eggs are in plentiful supply. Looking for a reason why milk cream chocolates are popular in Europe but not in the U.S. I did a little research into the milk itself. There is a lot of debate over the specific differences between milk from either side of the Atlantic, how much pasteurization the milk endures and what chemicals are fed to the cows. Overall, the consensus of foodies internationally rates European milk much higher than the American stuff in terms of taste and quality. It makes some sense that if European milk is higher quality, one would find it in more places. To this point, MilkyWay Bars in Europe use a light milk cream instead of the chocolate nougat we expect in the States. I’ve had a couple here in the store to satisfy a dairy urge, tasty milky piece of chocolate. 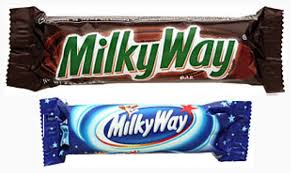 There is a long standing myth about the naming of the MilkyWay bar, that it was released at the same time as the 3 Musketeers Bar, and the packaging was accidentally switched; this would account why a 3 Musketeer Bar only has two ingredients while the MilkyWay has three (chocolate, caramel, and nougat).

In reality, this was not the case. Originally 3 Musketeer Bars came in packs of three, with three different flavors: a strawberry cream, a chocolate nougat, and a milk cream. Likewise MilkyWay Bars were named after a thick milkshake that bore the name, and came in two flavors, the chocolate nougat we know so well, as well as a milk cream flavor. To my own disappointment, the Milk cream bars have both phased out of Mars production in the United States, and no major milk cream bar has ever taken their place. Interestingly, the chocolate nougat MilkyWay never became popular in Europe, and the milk cream MilkyWay is the only one available. I think they got the better deal, between the two. 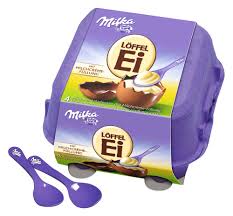 In the meantime, we’ll have to get by with what we can import: the kinder, the milka, and the Cadbury cream eggs. My favorite milk cream chocolate, however, is the Milka Loeffel Egg. A thin chocolate egg filled with thick vanilla custard. A bite of this egg reminds me of the holidays back home with my family, where chocolate pie is the dessert of choice. According to my mom, pie is simply a delivery mechanism for whipped cream, and the Milka Loeffel Egg replicates the exact ratio of chocolate and cream that I’m used to. It comes with a spoon, but I tend to eat the egg whole for an explosion of dairy custard goodness. If you get the chance to try any of these chocolates and go a little dairy crazy, your taste buds will reward you for the experience.