Matcha cha cha: A Dance of Japanese Culture and Chocolate

Japan. The nation of Robots, Video games, and . . . Chocolate?

When I studied abroad in Japan, I had no idea that the country was so infatuated with sweet treats and chocolate. The other exchange students and I ate fistfuls of chocolate covered biscuit sticks (Pocky), mushroom-shaped chocolates (Kinoko no Yama), and bonbons from micro-confectioneries in the many shopping malls. 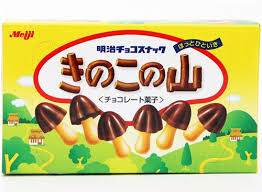 Chocolate has a very distinct taste profile in Japan, in my experience. Creamy, thick, and with less of a sugary taste than American chocolates. In terms of sugar, if British chocolates are considered a step up from American chocolates, Japanese chocolates are an equal and opposite step down. This is not surprising as historically, traditional Japanese deserts are not heavily sugar based. I ate equal amounts of mochi (lightly sweetened and flavored rice cake) and red bean paste (eaten similarly to marzipan).

The lack of sugar is by no means hampering chocolate in Japan, in fact, it has lead to a focus on some more subtle and powerful flavors that mix the Eastern traditions of Japan with the Western traditions of Chocolate. The most prolific flavor to find its way into Japanese chocolate is green tea. Specifically a type of tea known as Matcha.

Matcha is a shade grown green tea leaf that is prepared as a powder, and consumed by mixing the powder with warm or cool water. It is an incredibly silky and creamy drink with a strong sweet green tea flavor, without the bitterness that is associated with western teas. 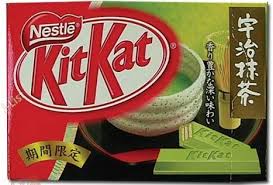 In our little store, we often get requests for Green Tea Kit Kats. In Japan, Nestle has experimented with just about every flavor under the sun, but by far their most popular is the Green Tea Bar, combining the silky matcha with a smooth light sweetness of white chocolate. Finding a Green Tea Kit Kat in the United States is an incredibly difficult prospect, but fortunately there is at least one chocolatier who has taken up the banner in America. With this bar Mariebelle has deconstructed everything that makes a Japanese chocolate good, and built a bar from the ground up by emphasizing all the best elements. They label the bar, white chocolate, but only to define its very high percentage of cocoa butter that makes up the bulk of the bar. The cocoa butter combined with the silky texture imbued by the Matcha, gives this bar an incredibly smooth feeling upon the tongue. Mariebelle adds significantly less sugar to the bar, accenting the subtle but deep flavors present in the matcha tea. The deep herbal taste from the leaf, really benefits from the thick consistency of the cocoa butter and milk, creating a flavor that is more than the sum of its parts.

In the United States, Matcha Chocolate options are still few and far between, but as chocolates trend towards more international twists you can be sure that chocolatiers will happily embrace this delightful combination.